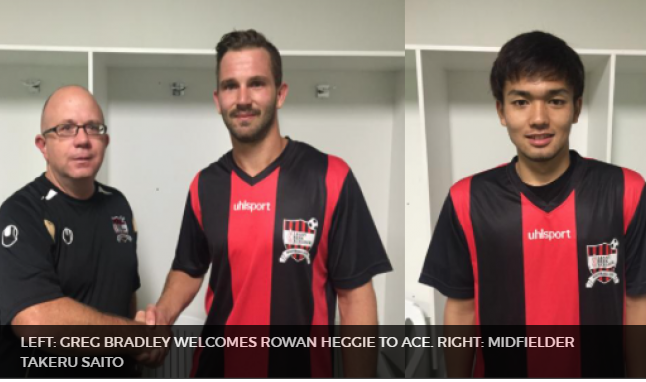 ACE have made two more key additions to their senior squad for the 2016 season.

Heggie, 25, is from Cairns but joined Jets after playing for Clarence United in Tasmania.

Saito made his name at the age of 18 joining one of the top universities in Japan and then captaining a side in Division Four of the J-League.

Pouria said he was delighted to secure both players for the BPL and FFA Cup campaigns.

“Saito has a strong mental and works hard,” said Pouria, “he battled and can control the game. He will play a crucial role in our upcoming journey 2016.

“ Heggie did not get too many chance to be involved with Moreton Bay United last season.

“But he is solid, a hard worker with good leadership attributes and will be a great value to our first team squad.”

Pouria takes his team to Richlands tonight (Friday) for the start of the pre-season Silver Boot competition.

ACE face their toughest test of the season so far when they line-up against NPL Queensland club Brisbane City. Kick-off 6.30pm.

ACE then face Capalaba on January 28, 7.30pm and finish against Gold Coast City on February 5, 8.30pm.The tournament semi-finals are on February 11 and finals on February 14. 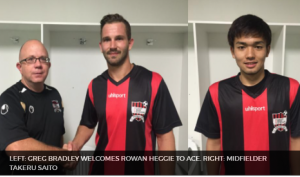