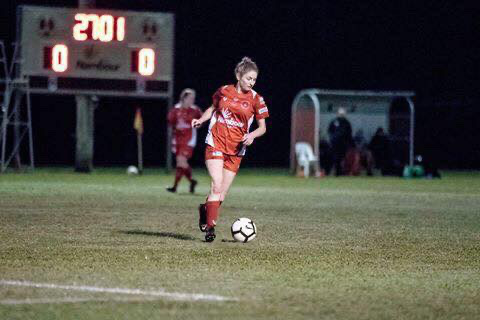 Emily Walkerden-Ridge, pictured above, wanted to “try something new” – and hopes ACE can help her.

The left-back’s career has, to date, been based on the Sunshine Coast with the Fire and Nambour Yandina United.

Searching for a change, Emily had a trial with the ACE women’s squad and is now part of coach Jamie Sanckson’s plans for the 2020 Capital League campaign.

“Growing up on the coast you play football against the same people year after year,” Emily said, “I wanted to try something new and give myself a new experience.

“I was invited to come (to ACE) for a trial and after the session Jamie said he was impressed and wanted to sign me.”

First impressions at the trial were certainly favourable. “I’m looking forward to seeing her in our side this season,” said coach Jamie.

“Emily is a hard-working full back that can play either on the right or left. She’s good on the ball but also likes to make a tackle.

“She’s young and has the capacity to work up and down giving us more attacking options too.”

But her sights are now set on Brisbane’s Women’s Capital League 1 and ACE. “Being a newcomer, I’m getting to know everything and everyone,” Emily said.

“It’s always tough to get to know people, especially living away but it’ll be good. A goal would be to make the finals as a new team … and stick it to the best.”