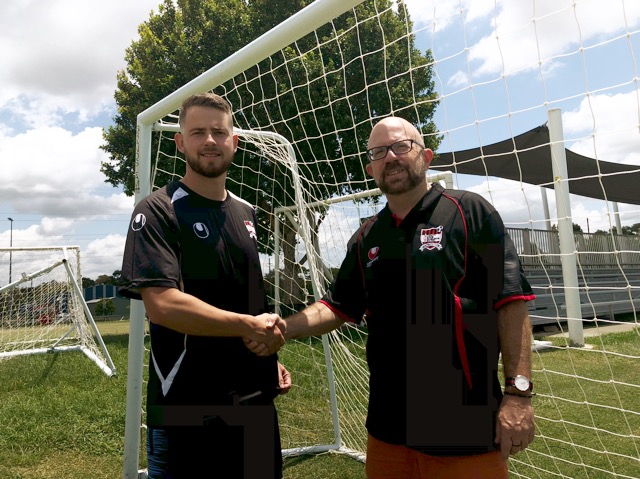 Jamie Sanckson, left, is welcomed to ACE by Greg Bradley, the club’s director of female coaching.

ALBANY Creek Excelsior’s “goals and ambitions” were the key factors behind Jamie Sanckson’s decision to join our coaching team.

Jamie will coach the ACE Senior Women’s team in next year’s Capital League, after one-and-a-half seasons in the same role at North Pine.

“I was impressed by the ambition of ACE and the goals it has,” said Jamie, “it’s a big club around this region and has great facilities.

“It wants to take women’s football forward and try to take it to the BPL (Brisbane Premier League), that’s what drove me …  pushing on and trying to be in the premier league.”

Greg Bradley, the ACE Female Director of Coaching, said: “We are delighted to have Jamie in our coaching team.

“His knowledge of women’s football in this region will be invaluable and we look forward to working with him to further develop this important section of our club and take ACE to new levels”.

Jamie, who guided North Pine to the Capital League title in his first half season in charge, has already started work on next season’s ACE squad.

“I have been in contact with a few girls who have played at BPL level,” he said, “and there’s a core group of players already here.

“I think it’s important to have experience. A couple of players at North Pine last year who were able to settled the team in certain situations.

“But in the attacking third, we’re looking for pace and youth. The trials are open for anyone to come down and give it a go.”

He also played for North Pine in the BPL last season, but yet to decide on his playing future. “My main concern is the girls here and getting them where we want them to be,” he said

“I want to play attacking football and try to go at teams. We won’t fear anyone next year and hopefully we’ll be right up there at the end of the season.”