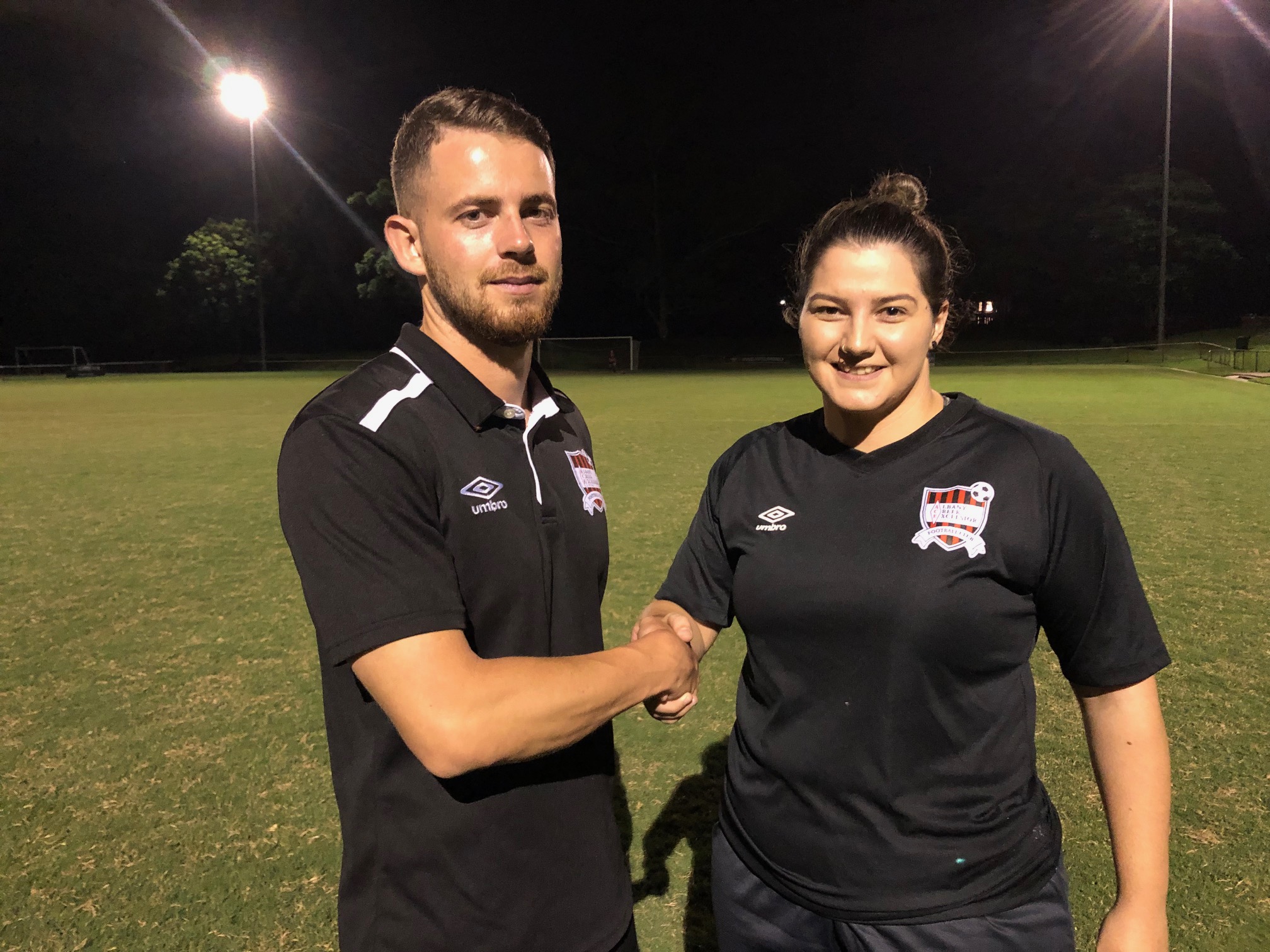 With two late signings, ACE Women’s coach Jamie Sanckson is a happy man on the eve of the Capital League 1 season. His squad has strengthened – Chloe Globke and former SWQ Thunder and Samford keeper Jess Broadfoot (pictured with the coach) being the latest to sign. Pre-season form has been good, but on Friday (March 6) the real season starts against Caboolture at Wolter Park at 8.30pm. Here Jamie previews the campaign and gives his verdict on the challenges ahead.

SQUAD: “I’m really happy with the squad leading into the start of the season, I think we’ve recruited really well and strengthened in all areas. Of course we are always interested in players if they become available and ways to strengthen further, but I’m extremely happy with the side we’ve put together.”

PRE-SEASON: “The weather has caused a few issues with our pre-season schedule, but I’m sure this will be the same for most sides. Having said that, when we have had the opportunity to train and play the girls have really put the effort in and tried to apply what we want to achieve. I think that was very noticeable in our last game. I’m confident the girls are ready, we have a fantastic squad so I’m sure they’ll be prepared.”

ROUND 1: “I’ve always stressed the importance of our long-term goals. Of course three points is one of the main priorities on Friday and that will be the same every week, but for me the way we play is so important – our mentality, our work rate, our attitude on the field. All of these things are part of the bigger picture … the girls see this too. Last week, we outplayed The Lakes for the first 30 minutes until they scored. We didn’t lose our heads, the girls remained calm, continued to play well and had faith in our philosophy and in the end reaped the rewards.”

RIVALS: “I think there will be several sides to watch out for this season – Olympic, Ipswich and Kangaroo Point I think are the obvious ones going off their pre-season and some of their signings.”

TARGETS: “This league has shown before it comes down to who turns up on the day and who wants it the most. We have quality all over the pitch and if the girls go into every game with the same mentality we have so far, then we can go far, that’s ultimately what it’ll come down too.”

THIS SEASON: “I think the players we have bought in this year shows our intent and our targets speak for themselves. It’s I do my job to develop the players and then the bigger goals will follow (finals and possibly promotion). ACE is a big club and the goal has always been BWPL. This year we would love to challenge for that and I believe as a group we have what it takes. We’ve been massively backed by the club in all sorts of ways and we’ve been given every opportunity to reach those targets this season. The players and I are just looking forward to Friday night now and hopefully we can get a good crowd for our first game … and a positive result.”