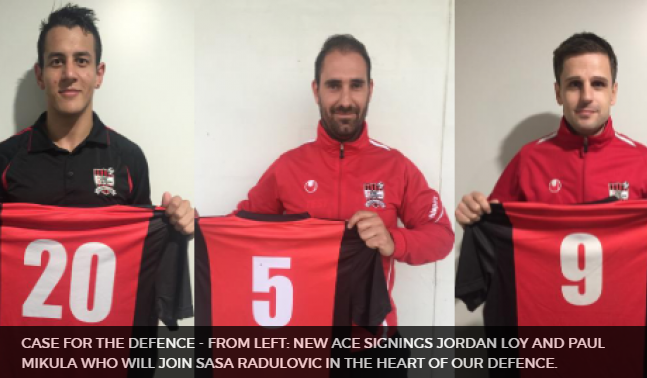 ACE are preparing for the new season with a new-look defence.

They will join a sizeable portion of last season’s squad, including last season’s defensive linchpin Sasa Radulovic, which finished sixth in the Brisbane Premier League.

“Last year we were starting from scratch,” said Pouria, “this year we are adding to our side and if we are looking to make the top four, we need these types of players.

“I believe we are in a much better position this year. Defensively we have good options, but I am still looking for a couple more signings – two more attacking players.”

Mikula, 30, has played at Mitchelton and Wolves, where he was a team-mate of Pouria’s in 2010.

“I know him from that moment,” said the ACE coach, “he’s an absolute fighter and winner on the field but a real gentleman off the pitch.

“He has exceptional leadership and will be a great mentor for the younger boys.”

Jordan Loy, 21, spent his junior years at ACE and then Samford, North Star and Brisbane Strikers.

He was at NPL Queensland side Brisbane City last season before heading back to where it all started for the 2016 campaign.

“I’m really happy Jordan has come back to this club,” said Pouria, “he is a strong, versatile defender with good vision and is comfortable on the ball.”

The reserves take on their North Pine counterparts at the same venue at 5pm. 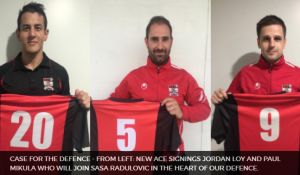