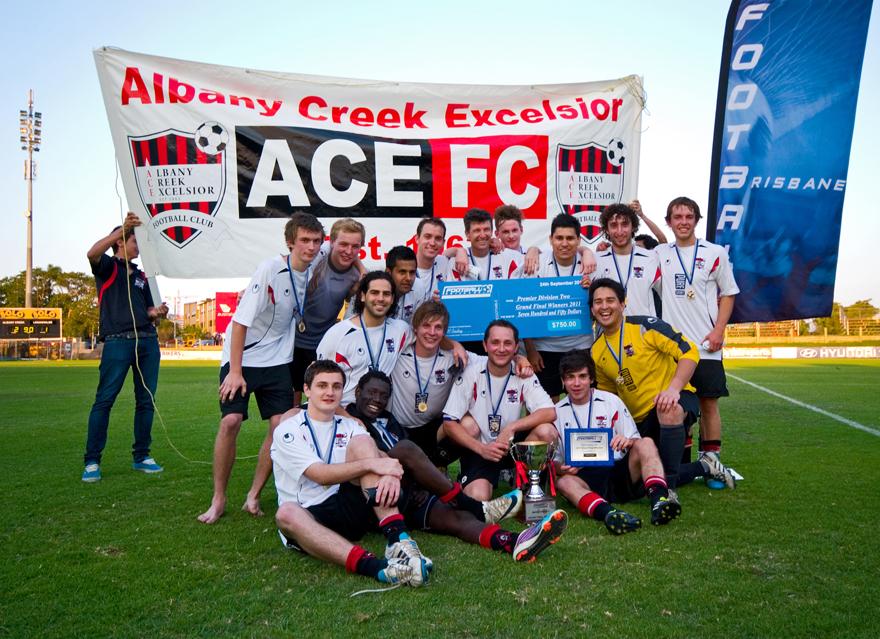 ACE Seniors and Reserves could, this weekend, become the club’s most successful squads – beating the Class of 2011.

This season ACE have the Premier League and Reserves Premierships – and Football Brisbane Club Championship.

Three down, two to go.

Tomorrow the Reserves face Bayside at Wolter Park in their grand final at 7.30pm and on Saturday the Seniors take on Grange at Logan, kick-off 5pm.

It’s a huge 24 hours in the history of Albany Creek Excelsior and could be “something special” according to Senior Vice-President Greg Bradley.

“For the supporters this is the biggest weekend,” said Greg, who coaches ACE Reserves, “everyone loves grand finals, that’s why I think there will be more focus on this.”

In 2011 the Reserves beat Loganholme 1-0 with a 90th-minute goal from Lewis Dent. Nick Moffatt was the Seniors’ hero striking twice in a 2-1 win also over Loganholme.

The results were hailed as the beginning of a new chapter for ACE.

Twelve months later the club was Division One Premiers, promoted to the Premier League and, of course, won it for the first time this season.

Matt Van Daalen is one of the playing links with 2011. He was in the Reserves side that season, coached by Greg Bradley.

Under the same coach he has been one of the Reserves’ leading scorers this term and will line up against Bayside on Friday night.

“We were never favourites in 2011,” Greg recalled, “to be honest no-one really gave us a chance.

“We just chugged along, went on something like a 12-game unbeaten run, drew a couple and then had to go to Bayside.

“They were running second at that stage and we beat them. Similar situation to this year and by coincidence the sides are here again.